For a little bit of history, the use of a butcher block first originated in China, though Europeans have used butcher blocks for centuries as well. The concept was to have a sturdy base on which to butcher meat, hence, the "butcher block". The physical act of chopping is also why these blocks are also commonly called chopping block as well.

In the past, just about anything could pass for a block, be it a tree stump, log round or even a flat rock (though we imagine that idea didn't last long due to the damage to the knives). These days, butcher blocks are be described as anything from a round 5" wood board to a stand alone table to a 20 square foot kitchen island. No wonder there's some confusion as to the technical definition of a butcher block, because the reality is that the definition is in the eye of the beholder and you can see our butcher blocks in varying shapes and sizes.

A Butcher Block is Defined by the Role in the Kitchen

In food preparation, knives are the ultimate chef's tool and go hand in hand with your prep surface. Prepping of vegetables normally involves knife work such as slicing, chiffonade, julienning, dicing and chopping. This is where your standard cutting board does the job, as all boards can handle light prep work.

Meats on the other hand, require quartering, deboning, chopping and filleting, which require a larger working surface that is also sturdy enough to stay in place and not be damaged. Most of the butcher blocks you see here on CuttingBoard.com are at leastone and a half inches thick and are assembled using end grain. Thickness is important because it adds the most important factor: weight.

We often see one inch boards that are marketed as butcher blocks, but if you're quartering meat, the last thing you want to do is worry about the block sliding away and having your meat go airborne or onto the ground. This is also the reason we generally recommend rubber feet for smaller boards or putting a kitchen towel under the block so it doesn't slip. With bigger, heavier butcher blocks or cutting boards, it's not so much an issue. 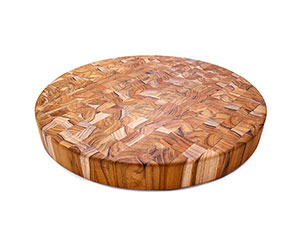 Grain edge is the other tell-tale sign of the role of a butcher block. In our opinion, all butcher blocks should be made with end grain as opposed to edge grain. End grain means that the end of the wood fibers are exposed, whereas edge grain means that the grain is running along the outside. The major difference is that end grain is resistant to cuts and scarring and is even self-healing over time, as the density of the fibers will push back into place. This is why there are even some softwoods that are used for making butcher blocks, as the benefit of end grain surpasses the benefits of using a hardwood with edge grain.

So, according to us, a butcher block must meet our three rules:

Can Cutting Boards Be Used as Butcher Blocks?

This question is much easier to answer now that we've established our three rules. If your cutting board matches the definition above, then you should have no qualms using it as a butcher block (or chopping block).

Of course, like many things, our definition isn't an exact science and if you're careful, you can probably get away with quartering your meat of choice on small plastic cutting board; just don't call it a butcher block. That said, if you do have a wood cutting board that is less than one inch thick and are doing some serious butchering, don't be surprised if you see cracks forming over time. If there's anything we hate seeing, it's a nice beautiful board with a crack down the middle, so we always recommend a true butcher block for a serious chef.