Why Acacia is Becoming a Popular Wood for Cutting Boards 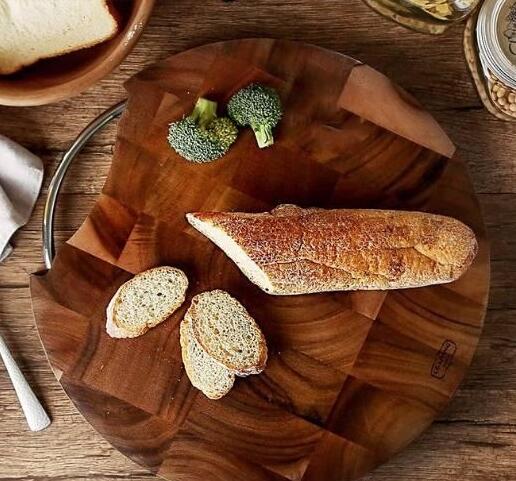 Acacia (also known as thorntree) is a natural wood that is increasingly popular on cutting boards. Historically, Acacia has been a precious wood for its beauty and strength. The Bible refers to a special red acacia tree that was grown in East Africa and was used to make the ark and Noah's Ark. Acacia seeds and leaves have been used for medicinal purposes, and acacia essence has been used as a perfume for hundreds of years. In modern times, it is common in acacia used in fine furniture, flooring, decorative arts and kitchens. Here we see the Acacia chopping block we collected.

Although traditional hardwoods such as maple, oak, cherries and walnuts look and function very well, these woods can still use high-quality edge grain boards of more than $100, and the final food cut can be sold for more than $300. These high price points open the door to materials such as bamboo, which are relatively cheap compared to the relatively low, if not better, prices compared to classic hardwoods.

Countries such as Thailand, Vietnam, Indonesia and India, which have a lot of acacias, have benefited from the popularity of bamboo and began exporting acacia as an alternative to high-priced hardwood. Unlike bamboo (which is technically a "grass"), Acacia is a real hardwood, rich in natural oils, giving it its natural water repellency. On the other hand, because of the density of the wood rather than the fat, bamboo resists moisture, which means that the bamboo becomes dull when compared to acacia or other hardwood.

There are more than 1,300 acacia species worldwide in Australia, Africa, North and South America, Europe, and Asia. Acacia is a species that is rich in species and rapidly growing, and has not been included in any endangered species (such as certain teak species). Due to the higher availability of procurement, Acacia Line is quite cheap per foot. Although maple, cherries and walnuts are traditionally used for chopping boards, these species are grown mainly in the United States and it is difficult to obtain timber workers overseas. Therefore, with the abundant supply of Acacia in other regions, we see more entry into the US market.

Unlike domestic wood, Acacia is usually harvested at a young age, which makes wood and wood strips smaller. This, in turn, results in many acacia chopping boards made using either end textures or added edge structures, which provide the checkerboard with a checkered or styling look. This looks very similar to walnut, although true acacia is golden yellow, and most of the acacias in use are colored with finished or food safe dyes.

Very rich, beautiful and well performed in the kitchen, it's no wonder why Acacia quickly became a popular choice for cutting boards. Most importantly, Acacia is affordable. In short, there is nothing to dislike, which is why this type of wood will continue to gain popularity on cutting boards.